Ventus Prime 3 K125 Keeps its promises in terms of safety, handling and durability, one of the best tires Hankook. But at what price and how to buy it cheaper? You will find all the rates below and the benefits of the K125 below. Delivery and assembly near you. 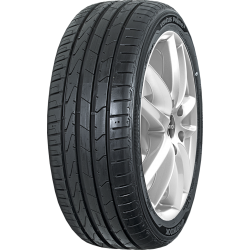 Fit for the road

Why choose this tire?

At Chez Hankook, it was time to renew its range of Ventus Prime summer tires. Already on the market since 2016, the successor to the Ventus Prime 2 is called Ventus Prime 3 (K125). Most of you will be able to enjoy it very well, since it is a summer tire that can fit sedans and minivans as well as small city cars. What is interesting about the new tires is that they are loaded with great technologies that make them even more efficient than ever.

The challenge of the tire Hankook Ventus Prime 3 K125 is to meet the needs of the most demanding among you in terms of comfort, of adherence and to driving pleasure. To do this, the engineers had to touch up the carcass, redesign the lateral grooves, reinforce the outer blocks, in short, touch almost everything so that the number 3 series would be per-for-man-te all along the line.

Since its partnership with Ford, Hankook it has never disappointed it so much that the manufacturer has decided to equip its new Ford Focus Active with Ventus Prime 3 tires. There is no end to the praise for this gum, since in many tests carried out by independent bodies, it always shows better ratings, as in the case of the note "good" granted by the ADAC in 2018, from its first place on the podium during the test organized by Auto Bild magazine in 2018, of its note "highly recommended" by Auto Zeitung magazine in 2017 or its award by the jury of the Red Dot Awards 2016. The Ventus Prime 3rd of the name is manufactured from the European factory in Hungary and is available in 53 sizes ranging from 15 to 18 inches, which you can find above. 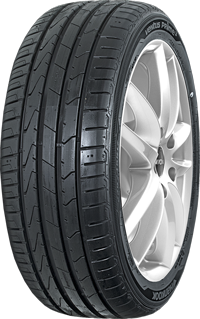 What are the qualities of the tire?

Let's get to the point! The Ventus Prime 3 tyre has been fully optimised to gain first in wet braking, which represents 8% shorter stopping distance in braking distance compared to its predecessor. This capacity is due to the new blend of high silica rubber combined with 4 wide grooves with bevelled edges. These also contribute to the reduction of aquaplaning.

The tire's handling is expressed by the way its structure has been designed. A quick explanation is in order! At the base, a strong and lightweight carcass maintains the stiffness of the sidewall and ensures the tire's longevity. On top are covered with steel layers whose upper layer serves as reinforcement at the top (or tread). It is surrounded without joints. The high-density bead of the Ventus Prime 3 not only keeps the tire on the wheel, but also provides better directional control and a quick steering response.

Returning to the tread pattern, the 3 localized ribs contribute to a high driving precision while offering low rolling resistance. The outer blocks have also been reinforced to further improve handling in all road conditions (dry or wet).

To reduce the noise of the tyre on the road, the experts have Hankook redesigned the tyre, but what is a plus with this rubber is the integration of the VAI or visual alignment indicator which makes it possible to identify a problem of parallelism without using a complex system.

What marks did it receive on the European label?

In size 205/55 R16, the tyre shows a energy efficiency rated C, which is pretty good. For wet grip, he received the best score A. As for its acoustic comfort, it is 2 bars, or one moderate noise of 71 dB.

What are the test scores on the Hankook Ventus Prime 3 K125 ?

In 2016, during the summer 2016 tire test, Autobild magazine compared 15 tires in 205/55 R16 size fitted one by one on a Volkswagen Golf. After hard tests, the verdict has been reached. The South Korean tire Ventus Prime 3 took first place thanks to its good price-performance ratio, precise and fast steering, excellent grip in both dry and wet conditions, low wear and tear and, above all, short braking distance. The only downside is its average resistance to aquaplaning. For Autobild, it is an "exemplary" tire. In 2018, the ADAC rated this tire as "good". with a score of 2.4 (in 205/55 R16 91V) 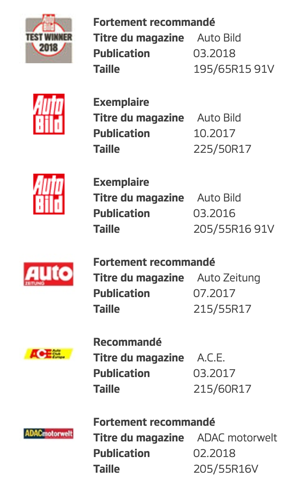 What are the customer opinions on the Hankook Ventus Prime 3 K125 ?

Most customers have commented on this famous tire. While some people find it "extra" in the rain and in dry weather, others argue that it is "correct". Consumers gave it a score of 4.1/5.

For which vehicle is it intended?

Ranging from 15 inches to 19 inches, the K125 Hankook is a car tire (passenger), which can be mounted on a sedan like the BMW 3 Series or the Renault Clio IV, on a compact like the Opel Meriva, on a city car like the Mercedes A Class or on an SUV like the Volkswagen TIGUAN.

Our opinion on the Hankook Ventus Prime 3 K125

At first glance, the tire's shell is undoubtedly rigid and well sculpted to challenge puddles, curves and even potholes. Many improvements have been made to this new version of the Ventus Prime and it is to be welcomed since it promises drivers more safety on the road. First, a gain in mileage and fuel consumption, then an improvement in performance when braking on wet surfaces thanks to the bevelled profile of the grooves. According to the manufacturer, the tire's contact area widens instantly when braking. These are great assets for a sporty driving experience.

We also appreciate its visual alignment indicator system. You can see for yourself the misalignment of your wheels by a simple glance at the indicators. Be aware that if your wheels are misaligned, in addition to the uncomfortable vibrations felt while driving, your tires will wear out too quickly and quickly run out of fuel.

So, there is nothing more to add except that many of you have already started buying this gum, so at the Hankook Ventus Prime 3 K125time of writing, it is at the top of the sales list!

At what price can it be purchased?

The price of the Hankook Prime 3 varies from 65€ to 193€, depending on the size. All prices can be found above in our comparison table, but here are examples for the most common sizes.

Check the dimensions of your tires to order the right size for your vehicle, you will find them on the side of the tire or in your car's logbook if you can't read a tire. Be aware that you can take a load index and a higher speed index.

Where to buy a Ventus Hankook Prime 3 cheap?

You have a multitude of opportunities to make a good deal. Whether in a car centre or online, there are many offers of disocunt tires. But which one is the one that certainly allows you to buy the Ventus Prime 3 cheaper ? By comparing tire prices! This is what we do on Tiregom, the best tire sales sites are referenced and compared to provide you with the best offer. No need to wait for promotions or sales, which are usually always more expensive than what we can find for you.

To receive them, please note that delivery is free, within 24/48 hours, in a garage near you or directly at home, it is according to your choice. The installation will be done in an assembly centre of your choice and some merchants can even assemble them for you at home. There's no better way!

Remember that road safety depends not only on the driver, but also on the vehicle. And the only point of contact between this vehicle and the road is of course the tires. Don't skimp on the purchase of your summer tires! By the way, having fulfilled all the qualities of an excellent tire, the Ventus Prime 3 is cheaper compared to other tires in its range.

Customers who viewed this tire also looked at 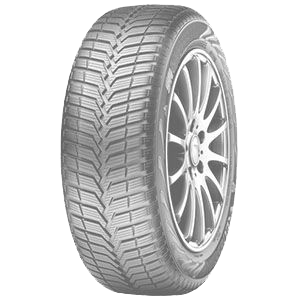